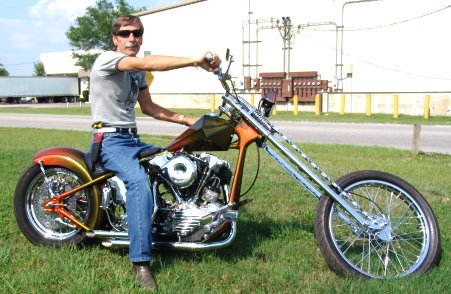 Gene got this bike about a thousand years ago... Bought it from Noah I think! Anyway, he has had this a while.. What it is is an original 46 Knuck that was chopped back when Jimi Hendrix still was playing the Star Spangled Banner. It was a cool bike when he brought it to us, but it was in dire need of some serious freshening! 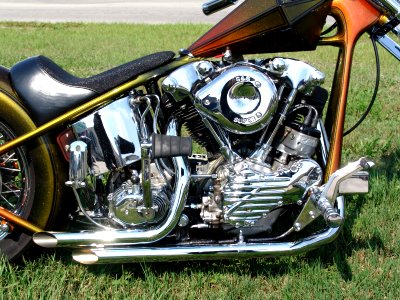 We started at the back, stuffing a 150MM Tire (Waaay big for '46) under a brand new fender. We then Twisted up some fender supports to match the cool twisted springer front end! We also stuffed a real brake (read disk rather than drum) for the back to go along with the new drum front wheel ("...never had a brake in the front before", says Gene) A gold Oring chain and a spiffy new Chrome Sprocket, finished up the back. 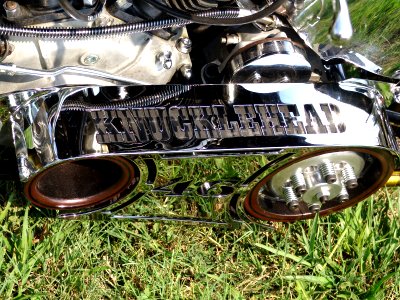 On the drive-line side of things, a BDL 3" Open Primary replaced the old Tin Primary. Gene was worried about the belt, so we fabbed up this cool Belt Cover... It was laser cut with the word "Knucklehead" on the top and "46" on the side... we even used a pushrod tube to space the side mount! Late model forward controls replaced the old mechanical brake/shifter setup and a set of drag pipes were modified to give the exhaust an old-school look. 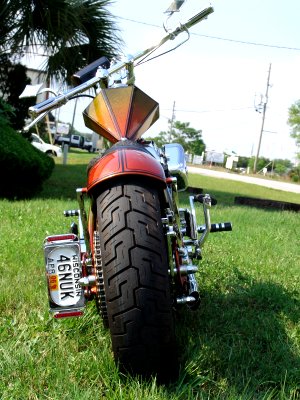 A Ness Left Side Tailight Bracket with a hydraulic switch (no more spring switch??) Takes care of the running and brake light. Some new chrome goodies like risers, drag bars, timing cover, etc were added. This is a magneto bike, so we called on Joe Hunt to help us with a rebuild so this bike starts quickly... no battery at all.

So now Gene rides his Roadking when he wants, but he can ride this 60 year old chop when he wants as well... Thanks English Jim for the nice pics... Look for this ride in "The Horse" coming soon.